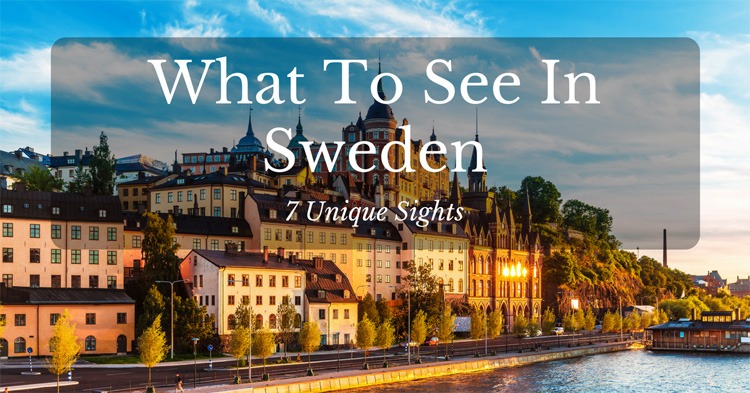 I love Swede﻿﻿n. Really, there are not many places like it anywhere in the world, where the preservation of culture holds more importance than the economic progress the country is currently making. Whatever you know about Sweden, whether it be their Viking past or the picturesque nature of the country, there will be a place to satisfy your indulgence.

Last time out, I wrote about Sweden and what it is really known for. I had a lot of fun putting that together, so without further ado, let us talk about what to see in Sweden! Back in the 16h century, Kalmar Castle was given its current design by the then-three Vasa kings Gustav, Erik XIV, and Johan III. Before then, it had been a medieval castle, and the kings transformed it into the Renaissance piece that stands today. Its location made it the key to the kingdom at the time (﻿﻿1﻿﻿). Walk through across the drawbridge and you will find yourself transported back to the Swedish days of old. Kalmar Slott is easily one of the most well-preserved castles in Sweden still standing today. The turrets still stand tall, the dungeons still gloomy and scary, and there are even secret passages, not unlike castles in fairy tales! (Check in the bathroom of King Erik’s chamber, it is said that his rivalry with his brother Johan prompted him to make a secret passage in there!)

Both the Golden Hall and Chequered Hall are grand, and alongside the well-preserved chapel nearby, is one of Sweden’s most wanted for weddings.

The Garden Society of Gothenburg

Sure, there are parks around the world. However, for a park that was started in 1842, it is still in full bloom today. In fact, not only is it widely considered one of the best preserved 19th-century parks in Europe, it has gotten a star in the Michelin Green Guide! Whether you are into roses (there are thousands of them in the rose gardens), trees, or perennials/annuals, the Garden Society of Gothenburg has you covered (2). It was the middle of the 19th century that gardens really took off all around Europe, and the Garden Society introduced many plant species, along with purposeful plant breeding. Today, they continue this tradition of horticulture, along with the added bonus of being able to bring people together in this gorgeous, peaceful setting. Obviously, the plants are important, but the cafes, restaurants, music and theater are what keep people coming throughout the year. Do check before you arrive and you might be able to attend one of their seasonal parties (3)! In terms of picturesque views of civilization merging with the natural world, the Øresund Bridge is the place to be. This is the longest automobile and rail bridge in all of Europe, despite not fully being a bridge! Øresund Bridge is just over 16 years old, as can be seen by the ideas that went into constructing this beauty. 16km of road and rail link Sweden and Denmark, and for the sake of the article, I will talk about Sweden’s side. A suspension bridge extends out into the ocean, as a regular bridge does, but unlike the others, it ends at an island; Peberholm is the man-made island that was built to support this transition point. The bridge them seemingly disappears into nowhere (4). Obviously it does not disappear, instead transitions into a tunnel that goes underground, right across the strait and pops up at Denmark’s end. Not only is this bridge/tunnel way ahead of its time, the architectural genius that went into its construction has not gone unnoticed. Amazingly, Peberholm is now home to more than 500 species of plant life. Beetles and butterflies are also found amongst the foliage, where it is a popular breeding ground for birds. Some rare spiders, insects, and even the green toad is found here. Somewhat of a lucky surprise, Øresund Bridge has delivered on its promises, and then some (5)! For a region so dipped in culture and tradition, the Uppsala Cathedral is a must visit. It is the largest cathedral in Scania and took over a decade to complete (constructed from 1287 to 1435). Its twin spires, however, were late 19th century additions.

From afar, Uppsala Cathedral is immense and does look a little daunting, and upon entry, the feeling could become overwhelming. French Gothic was the inspiration behind this architectural feat, and it is easy to spot, from the high ceilings to the small, individual chapels (6). Nobody knows what the cathedral looked like when it was first completed, as there are no recorded drawings of it, and the building has undergone several major changes since. In the 1500s, Sweden left the Roman Catholic Church, and this cathedral underwent its first overhaul. Not only does the cathedral hold some of the nation’s greatest ancient treasures in its adjoining museum, but there is also now a gift shop to purchase memorabilia. Visit the “Sture Clothes” collection, as they are the only complete collection of men’s wear that survived from the Renaissance.

I remember watching the news back in 2009 when the Kosterhavet National Park was officially inaugurated. I was young then and was not as travel-obsessed as I am now, and yet I remember that being the day that I decided I wanted, above anything, to visit Sweden. Despite not being much other than a marine reserve, Kosterhavet has turned into one of Sweden’s most visited tourist destinations, allowing for more resources to be pumped into the area. There are more than 200 marine species found here that cannot be found outside of Sweden. How cool is that (7)!

Get to the Koster Islands from the mainland via passenger ferry and spend the rest of your day hiking, swimming, and relaxing in this stunning marine reserve. Ferries do operate year-round, and while winter will serve up some astonishing views, summer is by far the most popular time to visit (8).

Unlike Kosterhavet National Park, Kiruna is the place to be the moment the first cold snap waltzes in through your door. It is 200km north of the Arctic Circle, and some of the most extraordinary natural phenomenon’s can be witnessed here. Not only are the Northern Lights and the Midnight Sun visible from this quaint little town, the highest mountains in Sweden are also here (9). Unfortunately, mining practices from days past have come back to haunt the people of Kiruna, and the city is now on the verge of dropping into an old mining pit. The city center is being moved, and soon the whole town will too, in the space of 20 years about two miles north-east.

There is nothing else like it in the world, be sure to check out their progress when you arrive (10).

Stockholm has only three UNESCO World Heritage Sites and this happens to be one of them. In fact, it was the very first Swedish attraction on the list back in 1991. What a way to end a trip to Sweden, a visit to an actual Palace! Find some time to make a day trip to this palace, fronted by sprawling gardens and open virtually year round. Sure, the current royal family still live here (and have since 1981), so naturally some of the rooms are not open to the public. Fret not, however, other than the Southern Wing, the rest of the residence and the grounds are yours to roam!

Be sure to catch some performances at the Stottsteater in the summer! It is the best preserved 18th-century theater in Europe!

Visiting Sweden is always a rush and there is never enough time in the world to see everything at once! These are just seven that I have found to be worth the effort to see, and hopefully, you did, too!

Comment below if you feel I missed anything and share it around if you enjoyed it! Who knows, maybe I will bump into you on my next Swedish adventure!

Previous Post Top 5 Stunning Locations For Your New Zealand Honeymoon Next Post Getting To Know The Best Of Myanmar!

You Really Want to Know Why You Should Visit Sweden? says

[…] Wild animals such as moose, deer, and lynx wander around casually in the countryside, and you would be lucky to bump into one of them and even take a selfie! If you are traveling with a bunch of friends, you will find perfect spots next to caves to set up camps and light bonfires as you barbecue and sing the nights away. You must take a camera or binoculars with you. This beautiful country needs an extra set of wide eyes and a photo gallery to store all your adventures. The following are a must see sites in Sweden; […]

Thanks for your pingback. Hope to help you as a partner.

[…] Whatever way you think about it, it is the well-roundedness of Sweden that makes it so great, between nature and civilization, and everything in between. Read up on anything you might have been unaware of above, and maybe Sweden will be your next travel destination! […]