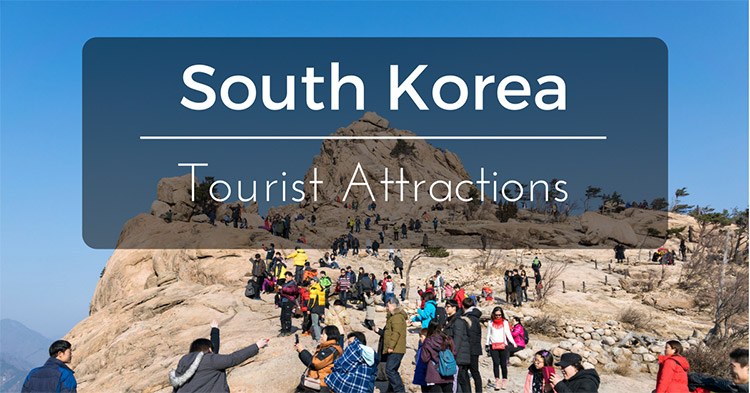 In all fairness, there are not many places in the world that can live up to the beauty of photographs. Luckily, having traveled extensively over the last few years, I have managed to stumble on a few. So in this article I want to introduce South Korea Tourist Attractions.

This piece will focus on South Korea and its perks and quirks. Instead of choosing between the big city of Seou﻿﻿l or the quaint little villages, let’s just talk about the places that are easy to get to – let’s talk about some of the coolest South Korea Tourist Attractions.

It should come as no surprise now that the first attraction on my personal list is a UNESCO World Heritage Site. With its highest peak at 1708m, Seorak-san is the third highest mountain in the country. In fact, its name literally translates to ‘snowy big mountain’ – cool, huh! Spreading across four cities and counties, its streams and valleys make for fantastic scenery. Follow the valleys and the dense forests, and you will be brought to either one of its two traditional temples. For a country, such as South Korea, that has allowed tradition to thrive, Seoraksan National Park is a treasure (1, 2).

This was also, personally, my favorite of all the mountains in South Korea. Other than being picturesque, it was also one of the best laid out. There was next to no chance of getting lost, and the tracks were well paved, allowing you to not worry about your surroundings, and just enjoy the sheer magnificence and beauty of the park. If there is ever a time to choose to visit, do it in the fall! While it may be when the park is busiest, it is that way for a good reason. There will be no better place to view the fiery red leaves slowly falling due to the change of seasons than here – surrounded by untouched, pure, serene nature (3).

With the recent rise of popularity of Busan, let’s give you a reason to visit! Introducing Beomeosa Temple, the 1300-year-old temple that is the pride of Busan. Despite being destroyed during the Japanese Invasion, it was rebuilt in 1713 and has been kept that way ever since (4). As one of the largest temples standing in Korea, there were many famed Great Masters who had studied and walked these halls. Dong San was one of them and has been credited as one of the founding fathers of today’s Buddhism practiced in South Korea. If you would like to hike to it, go right ahead! This, however, should not be a stumbling block for you in visiting this wonderful, spiritual place of worship, as there are buses that take you right to the doorstep. Either way, once you get there, get down on your knees, meditate, and look inside to find yourself (5,).

While most people use the temple as an end destination, the journey is actually quite magical in itself. No matter the season, the route is both heavily forested yet well laid out, and there will be countless spots for you just to stop and take a second to appreciate its beauty (6).

Everybody loves a success story, right? Once a decrepit, abandoned town, the community of Songwol-Dong village banded together and began renovations. Today, the village has been transformed into a wonderland for both kids and adults alike – colors bursting on every corner and your favorite cartoons coming to life.

Whatever cartoons you grew up on, it is likely that you will find it right here. Disney characters, old school favorites, and even many beloved Korean children’s characters make their home right here in the village. Without many big stores around (only some cafes and souvenir stores), it is exceedingly relaxing.

Personally, I really enjoy the fact that this is still, in fact, living, breathing village, and not just a tourist attraction. Shop houses and telephone poles are brightly painted, and you would never have known that there was once a time that people did not want to live here!

A tour of the village may take you an hour or so, depending on how many photo-stops you require. Best of all, this is one of the few tourist attractions that are entirely free of charge! Spend some time here, allow your inner child to run free, and recharge for the rest of your trip (7)!

Anyone who visits Gyeongju does so for a specific reason – to experience a dense culture like nowhere else in the country. This, however, should not take away from the abundance of natural beauty here; case in point: Gyerim. Aptly nicknamed the ‘Rooster forest,' I want you to take some time to appreciate it (8).

Even so, deep in the historical city of Gyeongju, Gyerim is known in many circles as the forest of history. Legend has it that a white chicken’s crying had led the King and his men to a box that held a very intelligent child. Upon releasing him, the boy attained more and more knowledge, and the forest was thus coined.

Its old trees are also part of why this is the forest of history. The knots in these old trunks and branches give away its old age, yet its stunningly bright green leaves show that there is still a lot of life left in them. Old, timey wooden benches litter the park grounds where it is not uncommon to see people just reading (9).

Remember the boy that they found in the woods? Well, he was named Kim Alji and is rumored to be the originator of the last name “Kim”. His memorial stone is still there unfortunately blocked off to the public... and yet it has not stopped 1.8 million Koreans identifying him as their shared ancestor.

A trip to Asia is not complete without a trip to a night market for some of the best, most authentic food the country has to offer, so here we go. Gwangjung Market is a little off the beaten track for most tourists, with many preferring the bright lights of the big city.

The tourists’ loss will be your gain as you will be able to mingle about with the locals, eating as they do. During the daytime, it is a wet market, but as the night falls, the food stalls begin their nightly ritual of assembly and preparation. Beware: it can get quite crowded, so be early (10)!

Over the last 112 years that they have been active, they have seen the crowds grow to crazy sizes. Not only do you get standard Korean street food fare here, but there are also some more unique choices. Are you game enough to try blood sausage or live octopus?

After you are done eating, feel free to wander over to the retail part of the night market. Bargains are a staple of the Asian experience, and this is no exception. It has been said that you pay wholesale prices for that, and while it cannot explicitly be confirmed, the prices are markedly lower than most other stores (1﻿1).

At the end of the day, South Korea is a land of beauty, a modern example of traditions living amongst nature and progress. These attractions, while largely touristy, will give you the perfect first look into the wonder that is South Korea.If you enjoyed this piece, please do share it with your friends and tell me what you thought below! Maybe I missed out on your favorite spot, and I need to revisit it sometime in the future.Oh, and happy travels!

[…] of things in here. There is a little something for everyone, and whatever your purpose for going to South Korea, to begin with, you will enjoy […]