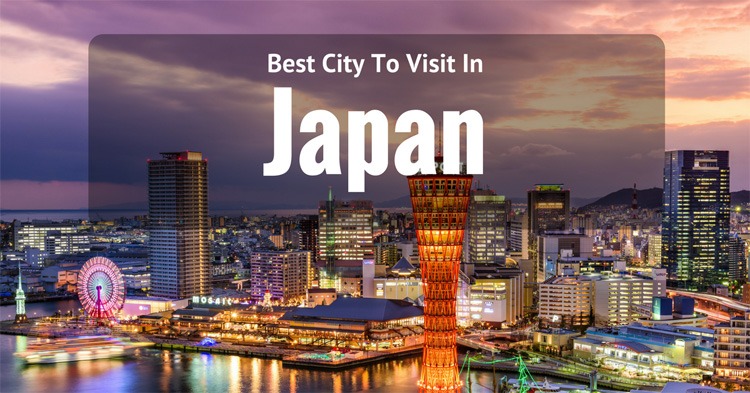 Every visit I make to Japan is an experience in itself. The similarities from town to town are laid bare to see, but the subtle differences between cities are what make each trip unique. Whether your ultimate goal is food, infrastructure, culture, landscape, or any combination of the four, there is a city in Japan that will help fulfill your desire.

No time to waste; it is time to explore Japan, the land of the Rising Sun. This is my personal listing of the five best cities to visit in Japan!

There is no better place to start than Tokyo, one of the most modern metropolises anywhere around the world. Tokyo is home to over 14 million people, and many of you may not know that while most refer to it as a city, it is technically a metropolis, after the merger of Tokyo City and the prefecture of Tokyo in 1943. Common stereotypes of big cities hardly scratch the surface of this stunning metropolis, with the Japanese finding the perfect blend of hyper-technology and preservation of tradition. Culture and pop culture live harmoniously side by side, with the city providing a cutting edge, while the prefecture proving resilient, and giving you a glimpse into Japan’s storied past (1). Other than magnificent skyscrapers, what is Tokyo city known for, you ask? Well, not many of you will know that Tokyo is, in fact, the world’s culinary capital, holding onto more Michelin stars than any other city. Honestly, I got the same feeling of satisfaction from eating at a homey ramen shop and a two Michelin star restaurant; that the food was made with love and passion. Incredibly, it was just at the end of last year that a tiny nine-seater ramen eatery scooped up a Michelin star, the first of its kind! The store in question is Tsuta, and I have had the luxury of having gone there before and after the star was awarded. The food is still simple, warming, and full of flavor, and the only thing that seems to have changed is the award hanging proudly on the wall (2). Plus, you get to see Mt.Fuji on a clear, sunny day. How awesome!

Compared to the towering skyscrapers of Tokyo, Kyoto feels a world away. Here, tradition marries culture in the ultimate blast from the past, and amazingly, it still works! Old shopping streets still house old specialty shops, selling anything remotely edible, from pickles to tofu. Public baths are also still huge right here in Kyoto. In line with tradition, the city Geisha still change their hair color 12 times a year in celebration of the ever-changing natural world. For some reason, the colors pop more so here than anywhere else in Japan, and the seasonal changes draw huge crowds from all over the world, especially going into the Autumn and then into the Spring (3). The preservation of culture here in Kyoto sees some stunning temples and shrines that have withstood the test of time, and you really should take some time to visit a few. You can learn the correct way to pray, view the architectural genius that went into building them or just enjoy a slow-paced, relaxed day out. Do keep in mind that while a shrine is an active place of worship, temples are mainly used for storage of sacred objects. Follow the rules at the gates (each shrine/temple has its own set of rules) and be sure to be respectful when visiting these religious sites (4)!

If you are as big a fan of uniform, well laid out areas like I am, then Sapporo of Hokkaido is a must visit! Today, it is Japan’s fifth largest city (largest on Hokkaido Island), and yet it is one of Japan’s youngest, with only 7 people living in Sapporo in 1857. Most of you will know it by its world famous, self-titled beer and it being the location of Asia’s first Winter Olympics in 1972, but it is so much more! Not only are they now known for their Sapporo Snow Festival (held every February, at the height of winter), they also have some of the best ramen stores to fill and warm up your stomachs (5)! American and European architects were hired for the speeding up process of urbanization, and hence the grid-like pattern within the city proper. Individual blocks of buildings are spread out beside a central vein of parks and fountains over 1,400m long, named Odori Park, making this one of the most organized cities worldwide. Visit Sapporo during any of the seasons to watch the vibe of the city change, from beer gardens lining Odori Park in the summer, to snow sculptures in the winter (6).

Want a blend of Tokyo’s hyper-speed metropolis status, yet contain the authentic old-timey traditions of Kyoto? Fukuoka needs to be your next Japanese destination. It was made with the fusion two areas around the Naka River, the Fukuoka Castle town on the west bank, and Hakata town on the east. As such, places around Fukuoka still hold names of both areas. Yatai, street food stalls, are very common here in Fukuoka, with most accommodating up to 10 customers at a time. Each stall has its own unique taste, but the food is generally held up to the same high standards, so all you have to do is pick a stall with enough seats, and chow down (7). Amazingly, Fukuoka is geographically closer to Seoul, Korea, than it is to Tokyo, and it was used as the harbor city for Japan. Today, tourists from Shanghai and Korea frequent Fukuoka, earning it the fortunate moniker of having ‘Hakata bijin’, meaning beautiful women. Fukuoka is a shining example of warmth and friendliness, and if you are looking for the best of both worlds, look no further (8).

In 710, Nara was known as Heijo and was established as Japan’s first permanent capital. The city contained many Buddhist monasteries at the time and they threatened to overthrow the government, forcing the ‘capital’ status to be moved to Nagaoka in 784. The power of the monasteries diminished after that, and while some are still active today, most remain artifacts of times past. Nara is home to eight UNESCO World Heritage Sites, coming in only second to Kyoto, an impressive feat for a city three times smaller and less populated the Kyoto. Daibutsu, the Great Buddha, is Nara’s centerpiece, which is sat inside the Todai-Ji, a temple that provides a view of Nara Park and its surroundings (9). Most famously, Nara Park is a serene experience. Tea houses are still active within the park to offer some respite for your weary soul (and probably legs), and deer freely roam around the park. They have become so accustomed to human presence in their surroundings that you can come here, purchase “deer crackers” and hand feed them to these wonderfully calm and kind animals. Otherwise, Yoshinoyama is commonly known as the place to be when the cherry blossoms explode into full bloom. If what you desire is a surreal yet relatively unpopulated spot to view these beautiful blooms, Nara is your next Japanese destination (10). At the end of the day, as a fan of both super-cities and deep-rooted culture, Japan has always been a personal favorite. Hopefully, this has helped you choose your next Japanese destination, as all these cities deserve a dedicated holiday on their own.

However, before you head out the door, be sure to check out my piece on planning a trip to Japan. Culture and practices are very important to the Japanese people, and that article will tell you all you need to know before you do make the trip!

Comment below if you have visited any of these cities, or if you feel I missed out on a gem! As always, do share it around to spread the love for Japan.ありがとうございます (Thank you)!

Exploring The Most Calming Things To Do In Taichung

Previous Post Quality On A Budget: Finding The Best Point And Shoot Camera Under $300 For Travel Next Post Stay And Explore: 6 Unique Thai Good Luck Symbols For Travelers

I have noticed you don’t monetize gotoawesomeplaces.com, don’t waste your traffic, you can earn extra bucks every
month with new monetization method. This is the best adsense alternative for any type of website
(they approve all websites), for more info simply search in gooogle: murgrabia’s tools

This is very helpful Blog and Good sharing experience.
Holidays Package in India

Thank you. Hope this help!